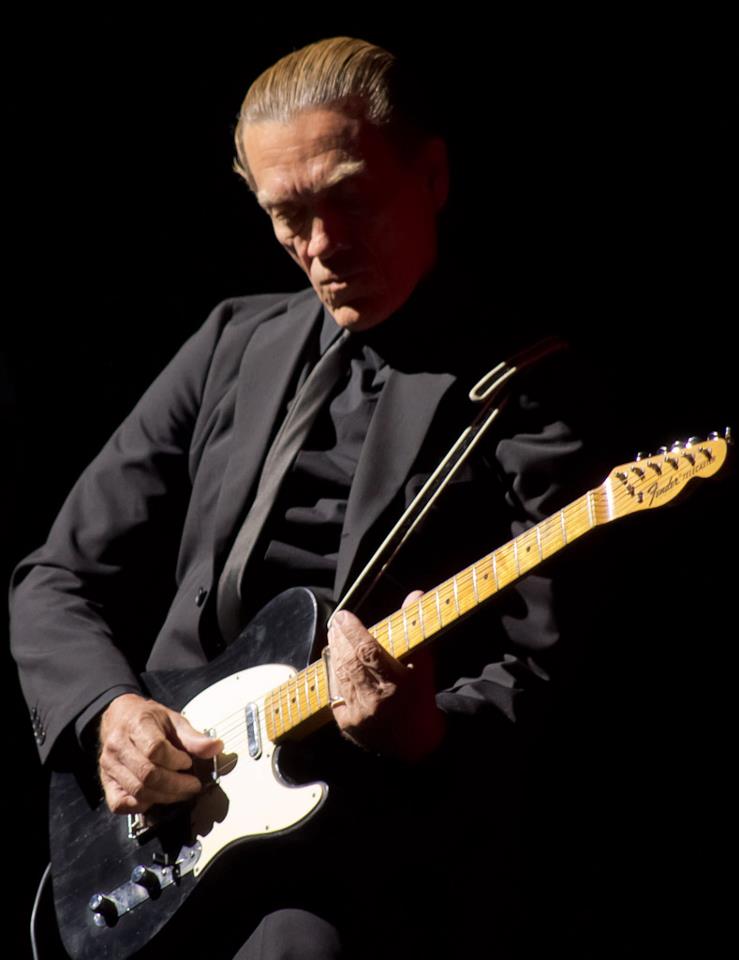 For G.E. (George Edward) Smith, a soulful guitarist, composer, singer, and bandleader, it all began in rural Stroudsburg, Pennsylvania, where he was just about born with a guitar in his hand. “I started playing around the age of four, and started getting good at seven,” he says. “Eventually, the girlfriend of one of my Uncles bought me a Martin, a real good guitar, in 1959. Then when folk the music scene came around and Bob Dylan was first performing, I got really into that.” By chance he was attending a taping of the television show ‘Hootenanny’ in Princeton, New Jersey, and saw the legendary Odetta and Josh White perform, further inciting his musicality.

On his 11th birthday, G.E.’s mother bought him his first electric guitar, a Fender Telecaster, a model that dated his birth year-1952. (“I still have that guitar, and there’s no sound that I can’t find in it.”) By then he was supporting himself as a musician, and playing in numerous situations–Pocono’s resorts, high school dances, you name it–often with musicians more than twice his age.

After accomplishing all he could in the bar-band scene as a teenager, Smith left the Pocono’s to conquer the Connecticut. He quickly established himself as a “top gun” guitarist and hooked up with the legendary Scratch band, which scorched clubs up and down the East Coast during the mid-70’s.

In late 1977, G.E. got his first break in the form of Dan Hartman, fresh off his hit “Instant Replay”. Dan hired G.E. to front his band for a “lip-synch tour” of Europe and the U.S. Upon his return to the East Coast, Smith moved to Manhattan and became the guitarist for Gilda Radner’s 1979 Broadway show “Gilda Live”. Radner and Smith became an item and shortly after married.

During that period of Smith’s life another break took place when the blue-eyed soulsters Daryl Hall and John Oates came calling. Not only was Smith hired to play lead guitar for Hall and Oates, he stayed for six years (1979-1985) constantly touring and recording with them, racking up hit after hit with songs like Private Eyes, Man Eater, Kiss on My List, and others. “It was insanely fun, “ he recalls. “We were so big that one year we decided it would be fun to perform during summer –all year round! We toured the northern hemisphere in the summer and the southern hemisphere in the during America’s winter.”

Another fortuitous event was the Live Aid and Farm Aid benefit concerts in early 85’. I ended up being the house band backing Mick Jagger, Tina Turner and whoever didn’t have a band.

G.E.’s hard work earned him a commanding position in the music industry as a first call blues/rock guitarist, sought out by major recording artists like Jagger, who, shortly after Live Aid, called Smith to work with him on his first solo album, She’s the Boss. (Smith also played on Jagger’s Primitive Cool.) During this period Smith also did a few one-off recordings and concerts with David Bowie, and Peter Wolfe, among other notables.

When Hall & Oates decided to take a long break from the music scene, Smith was chosen to be musical director for Saturday Night Live. “The way it happened was, I knew Howard Shore, the show’s original musical director, and producer Lorne Michaels, from my stint with Gilda,” says Smith. “In ’85, when Lorne returned to produce the show again, he asked me to be the musical director. And I was thrilled to take it.”

Leading the SNL band for 10 years (1985 – 1995) – it was arguably the best late-night band on television at the time – and G.E. won an Emmy. “I definitely grew a lot from playing with those world-class musicians, especially the horn section. I really had to learn to play in time and in tune. It was a great education.”

The SNL roster of guest musicians read like a Who’s Who of contemporary music: Eddie Van Halen, Keith Richards, Rickie Lee Jones, Al Green, Bryan Ferry, et al. In fact, many of the best musical (surprise) moments came when G.E. invited guitar heroes to play with the band, unannounced. Eddie Van Halen was the first, followed by an amazing roster that included David Gilmour, Lonnie Mack, Dave Edmonds, Johnny Winter, Buddy Guy, and others. The Buddy Guy visit eventually resulted in the GE’s 1996 Grammy-nominated Buddy Guy – Live CD, with G.E. and the SNL band. “I’ve been so lucky to get into these fantasy situations… that happened over and over on “SNL”. I got to play with everybody.

SNL also provided Smith with a songwriting opportunity when Mike Myers asked him to help write a tune. “Mike had this bit, called Wayne’s World, and he needed a theme song. Aerosmith was the musical guest that week, so Mike and I sat down and wrote a song that Aerosmith could sing and play along with.” Of course the “bit” became a hit film, the soundtrack (and song) a platinum-selling smash hit.

Even more amazing, in the midst of his SNL tenure Smith toured for almost four years with the legendary Bob Dylan. “I would fly home from various places on the globe to do the SNL show,” says G.E. “Both Bob and Lorne were very understanding about giving me the time that I needed. I would work with Bob during the week, then come home for Saturday’s show.” This setup was a true test of his stamina. “During one particularly tough period, I played a stadium concert in Sao Paulo, Brazil, flew back to New York for SNL, then flew to Rio to play several concerts with Bob, flew back that Saturday, then flew to London for a week of concerts with Bob, came back to New York, then met the band for concerts in Paris.”

During his SNL years Smith was also honored to be the musical director for special events such as the 1988 Emmy Awards, the 1993 Rhythm and Blues Foundation Awards and the Bob Dylan 30th Anniversary Concert at Madison Square Garden. The latter event was another of those “fantasy situations” that G.E. keeps getting involved in. “The rehearsals for that Dylan concert you wouldn’t believe. I was rehearsing with George Harrison in the morning, Eric Clapton in the afternoon, and Lou Reed at night. One afternoon, rehearsing the finale, I had Harrison, Tom Petty, Clapton, Neil Young, Dylan and Roger McGuinn all lined up and I’m saying, ‘OK, George you sing here, Eric you play now, Bob you come in here.’ Smith also has written with his friend and fellow musician Jimmy Buffett. Six String Music appears on Buffett’s album Fruitcakes. 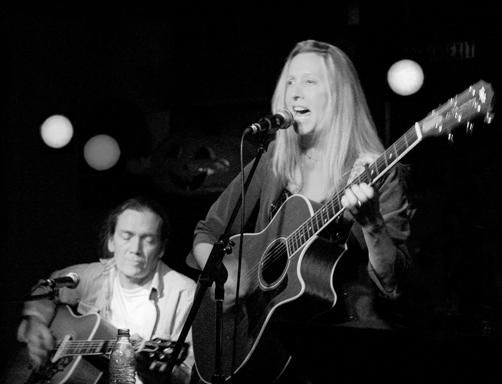 Smith released his electrifying, high octane CD, Incense Herbs, and Oils in 1998. Between live dates, he has been the musical director and bandleader honoring Bob Dylan, Willie Nelson, and Chuck Berry at the Kennedy Center Honors in Washington, D.C. He also led bands for The Muddy Waters Tribute, and The Mark Twain Awards honoring Richard Pryor, Jonathon Winters, Carl Rainer and most recently Lorne Michaels. Smith has kept a steady presence on the national scene. Is he too busy? Smith laughs and says, “I haven’t slept since the sixties.”

Another highlight of Smith’s history was hosting an interactive show on the Electric guitar over the internet, on NPR, and a live presentation at for Smithsonian Institute.

1999-2000 brought Smith back to SNL, appearing in the 25th Anniversary show and other guest appearances. He was featured on VH1 in the history of SNL, and even hosted the New Year’s Eve bash inaugurating the new Rose Center at the Museum of Natural History, (formerly the Haydn Planetarium).

During 2004-2006, GE raised the stakes for the Cleveland Browns where he headed up home games for the team with his music, rocking the NFL with classic rock and his mantra, “Brownstown.”

He spent a few years working with esteemed financial guru/rocker Roger McNamee and their band, Moonalice. Electrified: The Guitar Revolution hits airways this August for the new Smithsonian network.

GE joined Roger Waters 2010 WALL LIVE toured the world three times and toured with him for seven years. In 2015, GE returned to SNL where he received an EMMY award as bandleader, for the 40th SNL anniversary special.

In 2015, GE and wife, Taylor Barton, started an exciting project called PORTRAITS,  which hosts a rotating roster of acclaimed musicians and artists from all realms for a deeper look at what drives them creatively. Now in its forth series they have hosted creative legends from Billy Squier to Ethan Hawke and from the Bacon Brothers to the Avett Brothers.

Never one to stay idle, GE can often be seen playing with Jim Weider and others as “The Masters of the Telecaster,” popping in as a guest with the Craig Thatcher Band, Hot Tuna, Southside Johnny and the Asbury Jukes among others, performing for charity, and teaching at the Fur Peace Ranch.

Smith has played with the broadest possible spectrum of artists, from Red Buttons to Allen Ginsberg, from Desmond Child to Bob Dylan and Roger Waters; all points in between. “I’ve had an incredible ride in the world of Rock N’ Roll and American music,” says Smith, looking back over his career. GE Smith is one of the most brilliant guitarists out there.