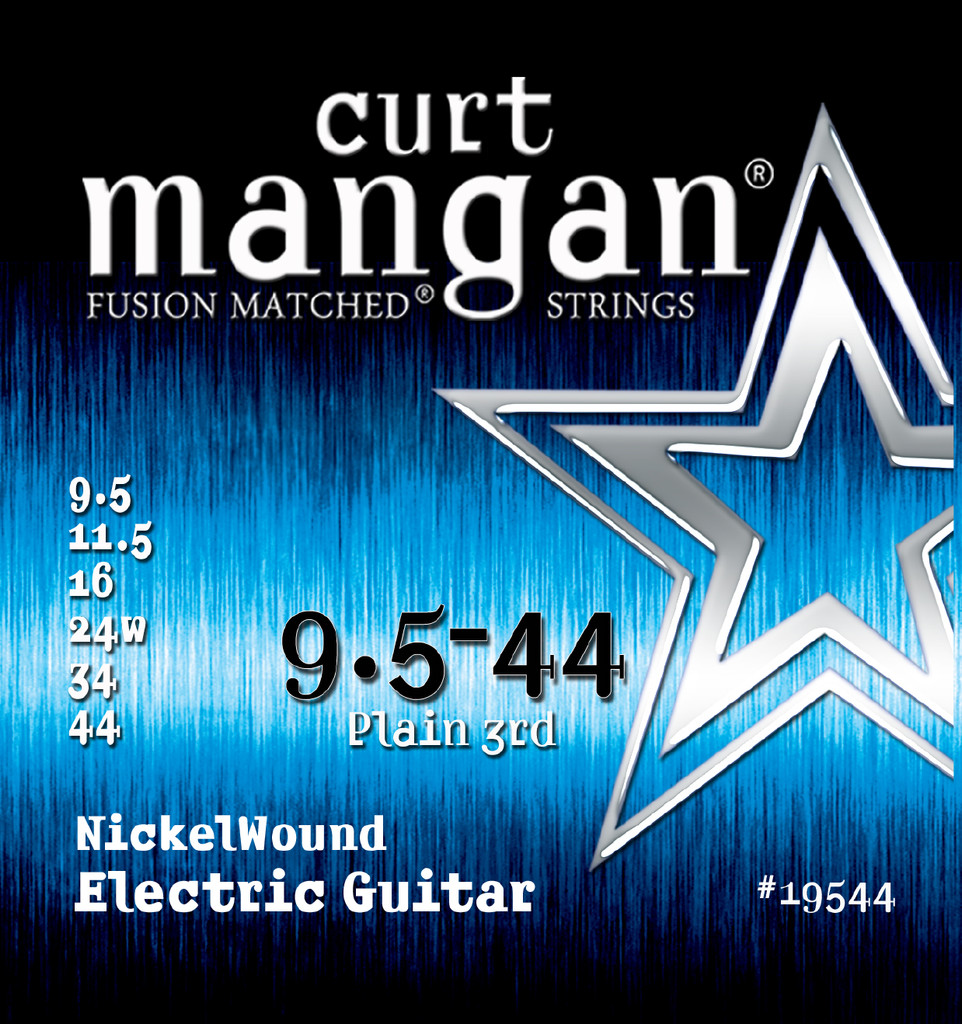 Nickel Wound strings are created by wrapping Nickel-Plated Steel alloys around a hex-shaped core wire which is made from tin-plated high-carbon steel (same as plain strings, but hex-shaped). The core-to-wrap ratio is the combined diameters of the core wire and the wrap wire which creates the overall diameter of the string.
Current Stock:
Shipping Cost: Calculated at Checkout
Weight: 0.10 LBS
Width: 4.00
Height: 4.00
Depth: 0.30
MPN: 19544
SKU: 19544

I love changing my strings. It&#039;s like putting on a fresh clean pair of clothes. In most cases I can&#039;t think of one thing that will improve your tone more than a new set of strings! (In fact, I&#039;m certain that many people who take their guitar apart and work on it and then put it back together with a new set of strings think that they&#039;re wonderful new tone is coming from a new part they upgraded... but it&#039;s really coming from the new strings). So I make sure to buy guitars that I can change strings quickly and easily and I change them often. With that, I&#039;ve tried many different brands, many different styles, many different sizes. I have narrowed down the fact that for whatever reason Curt Mangan&#039;s strings are easier to play for me than some of the other brands. They just feel a little softer on my fingers and bend a little easier. Could be my imagination but I&#039;m running with it, because ....whatever works works, and Curt Mangan strings work! On my 2020 Les Paul Modern I&#039;ve been trying out a few different sizes. I think the 9 to 46 is an excellent balance and I might end up there. The nines are a little bit thin under my fingers almost too delicate and sometimes I bend them more than I intend to so I went up to the 9.5&#039;s. The 9.5 definitely fit the bill with a little more tone and a little more resistance. I have not decided whether I&#039;m going to end up with nines or nine and a half on my Les Paul, they both have their benefits. 9.5 gives me a little more tactile feedback. 9.0 definitely feels lighter and easier to play but maybe too flimsy. 9.5 could be the &quot;Goldilock gauge&quot;. As far as my bass strings go, I&#039;ve tried many different gauges and in my humble opinion on my Les Paul the string gauge doesn&#039;t really make a big difference in the final tone. I&#039;ve gone up to 48s in my Les Paul.... and heck, I even have a guitar with 68&#039;s on it..... but back on topic, regarding my Les Paul I&#039;ve gone up to 48s and they play a fine but in the end they don&#039;t sound any better than 44s as far as I can tell. So I&#039;m going to stick with 44s and even try 42s for my sixth string because they give me all the grunt and tone I need. Just be careful not to measure your tone by playing acoustically, because you WILL get a change in tone acoustically with the string gauge change but that rarely translates through your pickups out your amp. Specifically on my Les Paul, for whatever reason when I go lighter in gauge with Curt Mangan strings I still get the same beefy sound. That&#039;s an enormous bonus! The playability of light strings but still with the thick beef of heavy strings? That&#039;s guitar nirvana. By the way I mostly play metal so when I say strings have grunt and tone I&#039;m talking about CHUGGING. I really didn&#039;t think I could play 44s and get the grunt and kick and thump that I&#039;m looking for. But by the time it goes through the guitar and my amp and everything else, 44s sound great even for chest-thumping palm mutes. After about a year and a half of changing strings every couple weeks and trying everything on the market I&#039;ve come down to the Curt Mangan 9 5 - 44 or 9 - 42 as perfection for my Gibson Les Paul. I have not tried the pure nickel strings yet, I&#039;m sure they sound awesome but I sort of prefer the gritty metallic nickel wound because I love heavy crunch. I also see that Kurt Mangan just came out with some stainless steel light gauge strings I want to try on my Les Paul. Maybe I can add a little grit to the warmth of my LP. Last but not least, if you check out the price.... at under $8 bucks these premium strings are a bargain! What you have here is a perfect balance starting at 9 and 1/2 on the light end which gives you some nice tactile feedback and a lot of tone then on the thicker strings if you stop at 44 you&#039;ve got a very playable string with plenty of beef. These NickelWound 9.5-44 might just be the perfect &quot;Goldilocks gauge&quot; for my Les Paul.

I have tried many brands Magnan is the best. 9.5 hits a sweet spot for me easy to bend thick enough to sound like 10s. Magnan makes the best strings hands down.

I&#039;ve tried 3 or 4 different brands of 9.5-44 strings. The Curt Mangan sets are perfect. Not sure exactly, but it seems they have more wraps per inch than D&#039;Addario or Ernie Ball. They are smooth, responsive, long lasting...in other words, PERFECT. Thanks Curt!